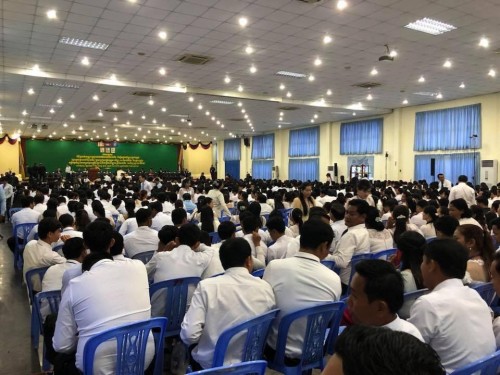 Samdech Akka Moha Sena Padei Techo Hun Sen, Prime Minister of the Kingdom of Cambodia, has noted the decline in the use of French language in the Kingdom, a Francophone nation.
The Premier made the remarks at the graduation ceremony of 1,630 students of the National Institute of Education after he found no teacher of French in today’s list of graduates.
French has been once a major foreign language in Cambodia, but it is different now, he said, stressing that some schools, universities, and other higher education institutions now use English instead of French.
Samdech Techo Hun Sen also noticed that the number of French speaking people in Cambodia, most of them are older people, has been dropping.
Throughout the world, there are about 274 million people speaking French. It is the fifth most widely-spoken language, after Mandarin Chinese, English, Spanish and according to estimations, Arabic and Hindi.