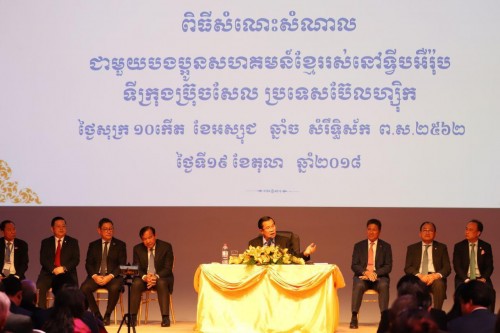 Prime Minister Hun Sen informed that he will propose to be the Chair of the Non-Aligned Movement (NAM) Summit if Cambodian People’s Party (CPP) wins the next election in 2023, addressing to nearly 1,000 Cambodians living and studying in EU on 19 October 2018.

Cambodia will chair the 13th Asia-Europe Summit in 2020, and the ASEAN Summit for the third time in 2022.

“I am the Chairman of the 13th ASEM Summit in this mandate and I can be the chair of NAM in Cambodia in the next mandate, as I have announced that I will be the Prime Minister for the next ten years at least,” he said.

According to the Royal Government of Cambodia spokesman Phay Siphan, Cambodia has joined the non-aligned movement like other countries in order to safeguard the country from being affected by other country’s influence.

Established in 1961, the Non-Aligned Movement (NAM) is a group of states that are not formally aligned with or against any major power bloc. As of 2012, the movement has 120 members.

The purpose of the organization is to ensure “the national independence, sovereignty, territorial integrity and security of non-aligned countries” in their “struggle against imperialism, colonialism, neo-colonialism, racism, and all forms of foreign aggression, occupation, domination, interference or hegemony as well as against great power and bloc politics.