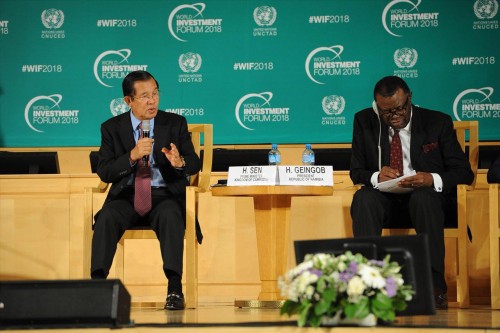 Delivering his remarks at the Global Leaders Investment Summit of the World Investment Forum 2018, held in Geneva on Tuesday under the topic: “Cambodia’s Investment Prospects in the Globalization Era”, Cambodian Prime Minister Hun Sen shared Cambodian’s policy on investment and development as follow:

Cambodia fully supports and attaches high priority to the globalization policy which is upheld by most countries in the globe. But the world is facing many challenges in political, economic, social dimensions as well as migration issue stemming from geo-political transformation, while protectionism tendency of some advanced economies is severely affecting the global investment environment and causing slower inflows of Foreign Direct Investment (FDI) to developing countries.

The premier stated that even in the above situation, the Royal Government of Cambodia has continued to adhere to openness-policy which contributed to high economic growth of around 7% annually during the last two decades. According to UNCTAD’s report, FDI inflows to Cambodia increased by 12 percent in 2017 reaching a record level of USD 2.8 billion in the area of finance, telecommunication, real estates and non-textile manufacturing sector, placing Cambodia among the 5 least developed countries in the world with the highest investment growth.

According to Cambodian Prime Minister, FDI is a crucial financial source for poverty reduction. Poverty rate was reduced from 53% in 2004 to around 13.5% in 2014. For Cambodia, FDI is regarded as a key factor for the national economic development and the realization of Sustainable Development Goals of the United Nations (SDGs).

In addition, the Royal Government of Cambodia is promoting investment in a Special Economic Zones (SEZs) with efficient clustering of services. Currently, investors have registered for the establishment of 47 SEZs, of which 19 are currently producing and exporting, and 10 are in the process of constructing key physical infrastructure. With investment potentials in all areas, protection and investment incentives policies, tax exemptions on labor force, big market as well as other advantages from the relocation of factories from neighboring countries to Cambodia together with growth of direct investment flows from major economies such as China, Japan, and South Korea, Cambodia is expected to realize higher growth of FDIs inflows.

In terms of economic liberalization under the global framework, Cambodia is playing an active role in coordinating and pushing WTO member countries to provide tariff and non-quota exemptions, facilitate on the rule of origins, issue exemption in service sectors, supply more technical assistances to less developed countries as well as review any measures which are not favorable to the global investment and trade, the Strongman of Cambodia underlined.