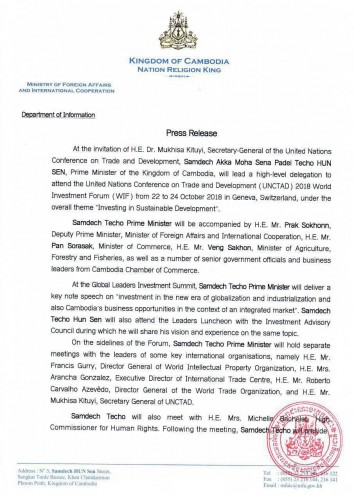 At the Global Leaders Investment Summit, Samdech Techo Prime Minister will deliver a key note speech on “investment in the new era of globalization and industrialization and also Cambodia’s business opportunities in the context of an integrated market”. Samdech Techo will also attend the Leaders Luncheon with the Investment Advisory Council during which he will share his vision and experience on the same topic.

Samdech Techo will meet with H.E. Mrs. Michelle Bachelet, High Commissioner for Human Rights. Following the meeting, Samdech Techo will preside over the signing by H.E. Deputy Prime Minister Prak Sokhonn and H.E. Mrs. Michelle Bachelet, of a Memorandum of Understanding between the Royal Government of Cambodia and the United Nations Office of the High Commissioner for Human Rights for the Implementation of a Technical Cooperation Programme on Human Rights.

During his stay in Switzerland, Prime Minister will meet with members of the Cambodian community and students living and studying in Switzerland.