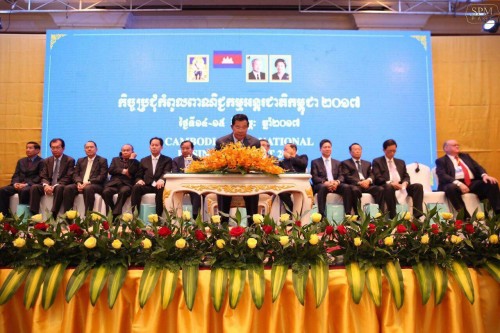 Samdech Akka Moha Sena Padei Techo Hun Sen, Prime Minister of the Kingdom of Cambodia, has expressed his stance to defend the ASEAN’s unity.
Addressing to the opening ceremony of the 2017 Cambodia International Business Summit held here this morning, Samdech Techo Hun Sen recalled that at the recent World Economic Forum in Switzerland, a foreign scholar asked him whether there is any country leaving ASEAN.
In reply, Samdech Techo Hun Sen told him not to ask this question to ASEAN because ASEAN is different from the EU. ASEAN has strong solidarity principle and there is “no big brother” as in the EU, he added, advising the foreign scholar to ask the EU that after Brexit, which country would be the next to depart the EU.
Cambodia is among the ten Member States of ASEAN or the Association of Southeast Asian Nations. The association was established on Aug. 8, 1967 in Bangkok, Thailand by the Founding members, including Indonesia, Malaysia, Philippines, Singapore and Thailand. Brunei Darussalam joined ASEAN on Jan. 7, 1984, followed by Viet Nam, on July 28, 1995; Lao PDR and Myanmar, on July 23, 1997; and Cambodia on April 30, 1999.
ASEAN nations are currently working closely to accelerate the economic growth, social progress and cultural development in the region through joint endeavours in the spirit of equality and partnership in order to strengthen the foundation for a prosperous and peaceful community of Southeast Asian Nations.
ASEAN also set to promote regional peace and stability through abiding respect for justice and the rule of law in the relationship among countries of the region and adherence to the principles of the United Nations Charter; active collaboration and mutual assistance on matters of common interest in the economic, social, cultural, technical, scientific and administrative fields; providing assistance to each other in the form of training and research facilities in the educational, professional, technical and administrative spheres; as well as to collaborate more effectively for the greater utilisation of their agriculture and industries, the expansion of their trade, including the study of the problems of international commodity trade, the improvement of their transportation and communications facilities and the raising of the living standards of their peoples; and promote Southeast Asian studies.