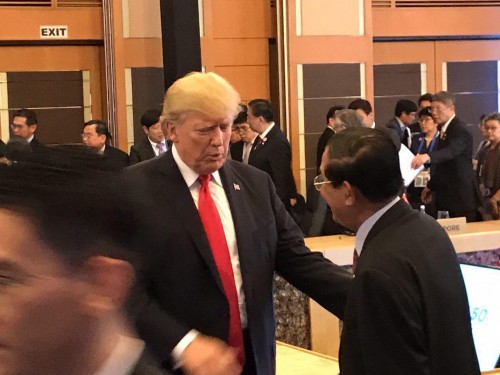 Samdech Akka Moha Sena Padei Techo Hun Sen, Prime Minister of the Kingdom of Cambodia, has urged the U.S. to stick to non-interference in its foreign policy.
“The point of non-interference is central to U.S. foreign policy, and the United State may have more friends and close friends, and then the cooperation in the economy, trade, and investment will begin from mutual trust, respect, and understanding,” underlined the Cambodian premier in his intervention at the 5th Summit to mark the 40th anniversary of ASEAN-U.S. Dialogue Relations held yesterday in Manila, the Philippines.
Samdech Techo Hun Sen recalled what U.S. President H.E. Donald Trump has mentioned at the United Nations, APEC and this summit about U.S. foreign policy: “We respect the independence and sovereignty of your country. We want you to grow strong and independent, to deepen your historical value and to strive for the better future of your people.”
“This is what we all strive for and grow together with a true partnership and a lasting partner. I think that Your Excellency is a great person who I respect the most. This is a bit of a topic I would like to outline, but it can be in the topic of U.S. relations with other countries,” said the Cambodian leader.
Prime Minister Hun Sen also recalled his support to the current U.S. president, saying that he was one among 100 people in Cambodia – 1 percent – who considered H.E. Donald Trump would win the election. He continued that before the election, he announced two times that H.E. Donald Trump was the winner, but he received an attack from the opposition party president: “Only the same hairy animal can live in the same nest. Donald Trump is a dictator over money, while Hun Sen is dictator by money and arms.”
A Cambodian who is a professor in the U.S said that if Donald Trump won the election, it would be the era of the rise of the non-humans, the premier added, pointing out that he became a target of attacks for supporting H.E. Donald Trump, but he is proud of what he said before the election, which turned out to be correct.
“Do not forget that my grandchildren have been trained to hate you (President Donald Trump). This shows that the U.S. embassy in Phnom Penh is not only neutral in the Cambodian issue, but is not neutral in the U.S. presidential election itself. I would like to inform you that if you follow the new policy in respect of the independence and sovereignty of other countries, the U.S. will have a lot of friends and you will be much respected and loved,” he stressed.
The real issue is this: the previous U.S. administration used the notion of democracy and human rights to interfere with the internal affairs of others, said Samdech Techo Hun Sen, underlining “We are victims again and again, and are now being victimised because of actions of your subordinating officials who practice against your policy lines. Your policy line is being revised, but the U.S. embassy in Phnom Penh has not made any change. We enforce the law, they attempt to prevent our legal enforcement. We enforce the laws for the country, they obstruct us. At this point, I think that maybe you have the duty to admonish the officials because this is a great principle of non-interference in the internal affairs of the people.”
“I also would like to point out that the issue between Cambodia with the United State is something I used to talk to President Obama. So it is: It is because Cambodia was abolished by a U.S.-backed coup and became a debtor of the United States, and that debt, we inherited, so we have to pay back. We asked that we pay back, but asked the U.S. to transform the debt into aid to Cambodia. This is the point we ask you to consider because, it’s like taking a hammer to hit us and asking us to pay for brokering handle of the hammer. We did not know what they were doing with this aid; they bought weapons to fight in Cambodia while we were still young. But regardless of state heritage, we have to respect,” said Samdech Techo Hun Sen.