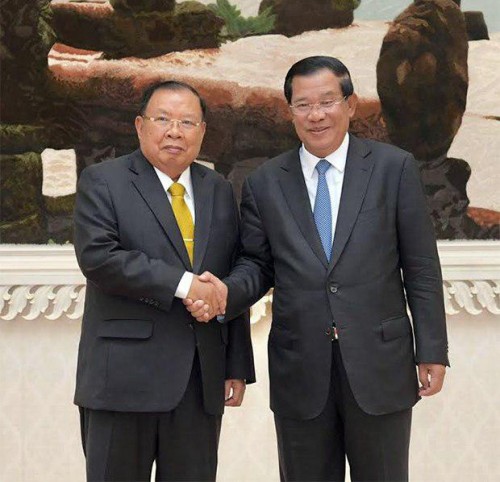 Cambodia’s Prime Minister Samdech Akka Moha Sena Padei Techo Hun Sen held talks here this afternoon with visiting President of the Lao People’s Democratic Republic H.E. Bounnhang Vorachith, during which both leaders pledged to further deepen and expand the good cooperation between the two neighbouring countries.
H.E. Bounnhang Vorachith expressed his appreciation to the Royal Government of Cambodia for its warm hospitality throughout his state visit in Cambodia, and spoke highly of the current achievements of Cambodia, H.E. Eang Sophalleth, Assistant to the Cambodian premier, told reporters after the meeting.
The Lao president highly valued the visit exchange between the two countries’ leaders, officials at all levels as well as between their people, and lauded their cooperation in information exchange and experience sharing. He suggested both sides to further boost their cooperation in the areas of trade, industry, agriculture, services, and to promote mutual investments.
For his part, Samdech Techo Hun Sen shared the same ideas with H.E. Bounnhang Vorachith over the relations and cooperation between Cambodia and Laos. He also laid stress on the significance of connectivity between the two nations, especially between Laos’ southern part and Cambodia’s northeastern part.