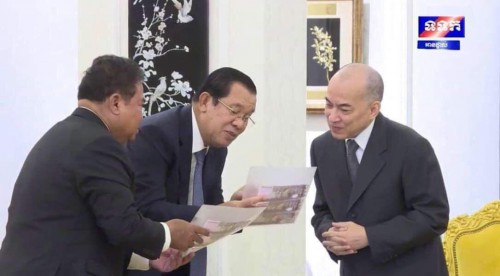 His Majesty King Norodom Sihamoni and Queen Mother Norodom Monineath Sihanouk highly commended the leadership of Prime Minister Hun Sen in maintaining peace, stability, development and harmony for the people.
The commendation was conveyed during Prime Minister paid a royal audience to His and Her Majesty on Thursday evening.

Prime Minister has informed King and Queen Mother that the Government has timely intervened to rescue people and provide food and healthcare during flood period under the support of all-level armed forces and authority.
The premier also mentioned the efforts of the Government in promoting the kingdom’s economic growth and expanding international cooperation on economic and trade sectors.
His Majesty King and Her Majesty Queen Mother conveyed satisfaction and commendation to the leadership of the premier for working days and nights to maintain peace and national unity as well as high achievement in economic growth and social affairs.