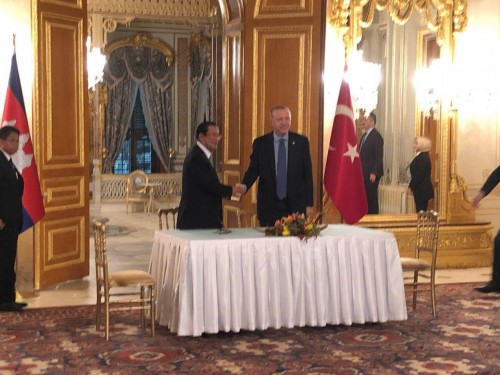 The Istanbul Government stressed on facilitating travel and promoting air connectivity; promoting market research; jointly disseminating and exchanging of information, statistical data, policies, and law on tourism law; human capital development; professional training; exchanging of visits between the public and private sectors in the field tourism to create a network of business and tourism investment projects; and hosting events, workshops, conferences and meetings.

Turkey and Cambodia have been engaged diplomatically since 1968 and have officially re-tied their diplomatic relations on 14 June 1994.

Cambodian Prime Minister stated that he will purchase land in Ankara, the capital of the Republic of Turkey in 2019 to open Cambodian Embassy, as Turkey already had her Embassy in Phnom Penh since 2013.

Today, Cambodia has two consulates in the Republic of Turkey, one in Ankara and another in Istanbul.

The two also wish to commemorate the 50th anniversary of Cambodia-Turkey official diplomacy in 2020 by creating activities for people-to-people exchanges.