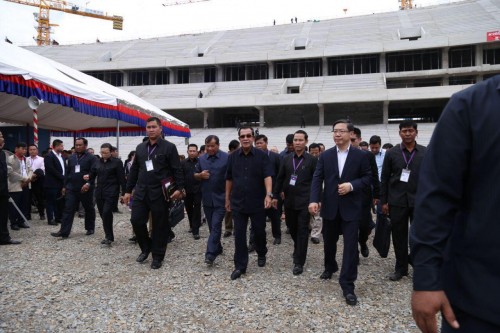 Cambodian Prime Minister Hun Sen has made it clear that the passing of Cambodia Democracy Act of 2018 by American lawmakers will not affect Cambodian people and country, speaking during his visit to the new stadium Morodok Techo National Stadium on Monday.
According to Prime Minister, the United States has prepared many bills to sanction Vietnam, yet they have never adopted once.
“How will Cambodian people suffer from Cambodia Democracy Act 2018? The bill has only two specific purposes: apply property blocking and visa restriction sanctions against Cambodian senior official,” said Prime Minister.
“The bill will not affect my people. And why would my senior officials go to the US?” he added.
The premier also asked the US to apply property blocking on his officials, so he will find out who committed corruption.
Premier Hun Sen highlighted that he will still step on the US soil, as the United Nations headquarters is in New York. He believed that Trump’s administration would not cause trouble to Cambodia-US relations.
Cambodian Democracy Act directs the President to apply property-blocking and visa restriction sanctions against each senior official of the Cambodian government, military, or security forces who has directly and substantially undermined democracy in Cambodia and committed or directed serious human rights violations, according to the Congress of the United States.
Sanctions may be suspended for up to one year if the President certifies to Congress that Cambodia is making progress toward ending government efforts to undermine democracy, ending human rights violations, and conducting elections that allow for the participation of credible opposition candidates.
Cambodia’s foreign affairs is utterly disappointed over the bill’s content, and emphatically dismisses its groundless accusations against the kingdom based on twisted, selective, and out-of-date information, driven by political motivation and double standards.
Cambodia considered the adoption of the bill is an interference in internal affairs of Cambodia as a peaceful, independent, and sovereign nation; and pledged to absolutely fight against interferences in any forms.