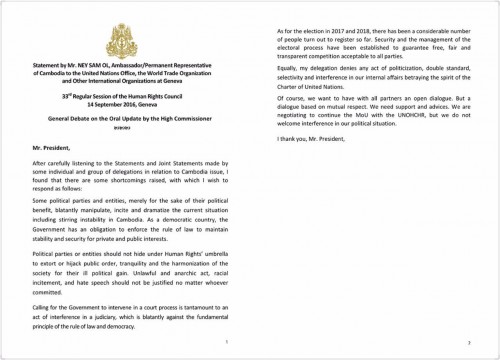 The statement was made following the 34th Session of the Human Rights Council, held on March 9, 2017, Geneva, Switzerland.

“Unfortunately, we observe that, in his oral Statement, the High Commissioner has chosen only one side of a coin to unfairly paint the situation of human rights in Cambodia in a negative way, which contradicts to what have happened on the
ground,” he said.

“Cambodia remains committed to guaranteeing the individual rights, and freedom of expression. But freedom of expression is not absolute and it shall be executed with responsibilities under the jurisdiction of the scope of law and regulation in force. Thus, one should not hide behind human rights shade to stir instability for one’s own ill agenda,” he added.

The ambassador, meanwhile, suggested that in Cambodia, law indiscriminately applies to all irrespective of political party, other entity, or individual. Law making process, including Law on Political Parties, has been conducted in conformity with the Constitution taking into account international rules and standards.