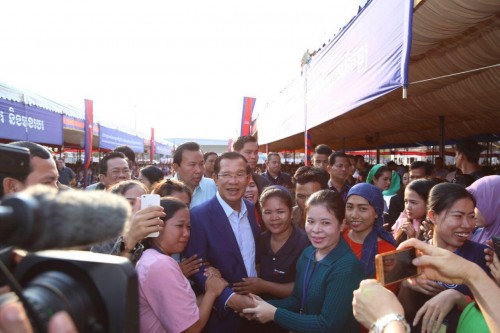 The Royal Government of Cambodia and the Government of Thailand have agreed to establish factories at Cambodia-Thailand border, aimed at reducing illegal migrant workers to Thailand, according Cambodia Premier Hun Sen in a meeting with more than 13,000 workers from seven factories in Koh Kong province on Wednesday.

“We will create special economic zones to provide jobs to workers without the need to cross borders,” stated the premier.

Head of the Royal Government pledged to cooperate with neighboring countries like Thailand, Vietnam, and Laos, to transform borders into peaceful and prosperous regions.

According to Prime Minister Cambodian-Thai trade volume hit $7 billion in 2018. Both pledged to upgrade the four border gates and open new checkpoints to boost bilateral trade and tourism along the border, aimed to increase bilateral trade to $15 billion over the next five years.