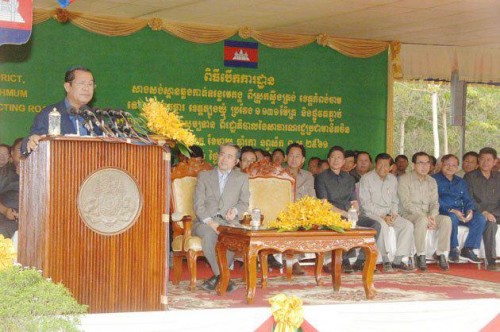 From this midnight, authorities at all levels have to take action against all overloaded trucks, according to Prime Minister Samdech Akka Moha Sena Padei Techo Hun Sen’s public speech at the groundbreaking ceremony for the construction of Stung Trang-Krauch Chmar Bridge held this morning in Kampong Cham province.
“From 00:00 tonight onwards, all overloaded trucks and non-compliant vehicles will be arrested. If they are found on road in any province or district, the governor of that province and district will be responsible,” Samdech Techo Hun Sen underlined.
Those overloaded trucks and non-compliant vehicles can damage roads and cause road accidents, said the premier.
A report of the Ministry of Public Works and Transport shows that 923,657 vehicles were checked last year, and 2,953 of which were found to be overloaded from 4 to 25 tonnes and more than 1,000 others were non-compliant vehicles.