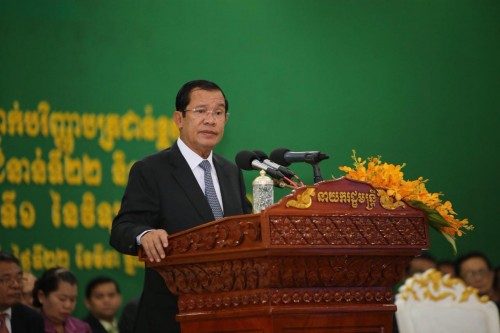 Addressing to 1,630 teaching graduates in Phnom Penh on Thursday, Prime Minister Hun Sen said that Cambodia stands the fifth among the 10 ASEAN Member States to provide salary to government officials and armed forces, which is an effort from public financial reform.

The premier announced on March 1 to continue increasing salary for Royal Cambodian Armed Forces in April, with a bonus of $12.5 (50,000 riel).

In order to enhance the living standards of officials, doctors, police, and gendarmerie, the Royal Government of Cambodia has their salaries promoted twice per year, an increase of 12% of the base salary in January and a bonus of $12.5 in April before Khmer New Year.

“In January, your base salary was promoted, in April your bonus will be remunerated to enjoy dancing during Khmer New Year,” said the premier.

Civil servants, low-rank soldiers, low-rank police officers, and teachers and doctors will get approximately $250, 260, $275, and $280 respectively, according to Ministry of Civil Service spokesman Youk Bunna.

The premier, over the past time, has pledged to promote salary to civil servants, teachers, doctors, and armed forces to reach at least $250 per month by 2018. As seen, the premier is a man who keeps the promise.