Cambodia Now and Then Is Far Different: PM Hun Sen 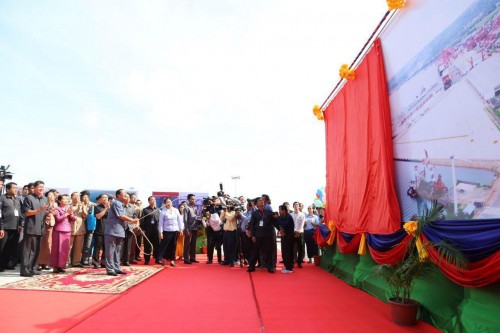 Cambodian Prime Minister Hun Sen said that Cambodia was a very poor after 1979, but Cambodia is now a developing country, speaking at the inauguration ceremony for the official use of the $74 million Sihanoukville autonomous port multipurpose terminal on Monday.

“We were very poor after 1979, but we are now in a status of development. To ensure peace and development, vote for Cambodian People’s Party (CPP), ordered 20th on ballot paper,” stated the premier.

He added that the current economy continues to grow around 7% per annum and so will it be in 2018, a hope for salary increase for everyone.

Prime Minister underlined that to ensure economic growth, employment and increased salaries, people must continue to maintain peace and political stability in Cambodia.

He recalled that no war-torn countries could prosper. In fact, in 1970, Cambodia plunged into the civil wars, facing all kinds of devastation – separated families, couples, and kids.

Cambodia suffers enough; thus, the Royal Government will continue to lead to achieve further growth for the people of Cambodia.