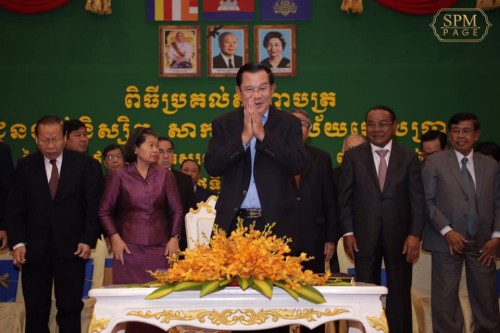 Cambodian Prime Minister Hun Sen said that Cambodia needs to buy 455 cars to serve in the 13th Asia-Europe Summit in 2020, addressing on Tuesday at the graduation ceremony of Build Bright University (BBU) at Diamond Phnom Penh.
“Next year, we host the 13th Asia-Europe Summit; therefore, we need to buy 455 cars to serve this event,” said Prime Minister Hun Sen.
On 19 October 2019, the Asia-Europe leaders approved Cambodia for the first time to host the 13th Asia-Europe Summit in 2020.
Prime Minister Hun Sen said that Cambodia is committed to ensure the successful holding of the 13th ASEM Summit. As the chair, Cambodia pledged to strengthen close and mutual beneficial partnerships among member countries to contribute to the promotion of peace and security, and to achieve 2030 Agenda for Sustainable Development Goals.
If the summit takes place as scheduled, it will be the first time ever since 2014 for Cambodia to host such a large gathering of leaders from 53 partners, including the 30 European countries, 28 EU member states, Norway, Switzerland, 21 Asian countries, and the ASEAN Secretariat.
ASEM Summit was held to strengthen cooperation between Asia and Europe, focusing on three pillars, including Political & Security Pillar, Economic & Financial Pillar, Social, Cultural & Educational Pillar. ASEM accounts for 50 percent of the world’s GDP, equivalent to 60 percent of the world’s population and 60 percent of global trade.
The first ASEM meeting was held in March 1996 in Bangkok, Thailand.