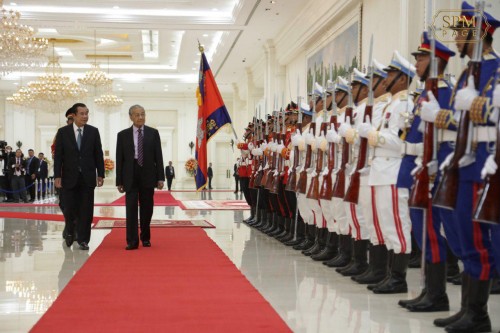 Cambodian Prime Minister Hun Sen and Malaysian Prime Minister H.E. Tun Dr. Mahathir Mohamad issued a joint statement on Tuesday expressing their satisfaction on the growing ties of friendship and close cooperation between the two countries in multiple domains including trade and investment, halal industry development, defence and security, tourism, agriculture, and education.
Both leaders reaffirmed the importance in further strengthening and expanding cooperation and collaboration in bilateral, regional and multilateral frameworks for the benefit of the two peoples, hereby contributing to peace, stability and prosperity in the region as a whole, according to the joint statement.
Cambodia and Malaysia established diplomatic relations on 31 August 1957. During Cambodia’s wartime from 1969 to 1975, the two countries maintained their diplomatic ties at the level of the Chargé d’Affaires in Beijing. Cambodia and Malaysia re-established diplomatic ties on 19 December 1991.
Trade volume between the two countries has grown significantly over the past few years. According to the report of the General Department of Customs and Excise of Cambodia, in 2017, the trade volume of the two countries reached over USD 411 million, in which Cambodia exported to Malaysia USD 148 million and imported back nearly USD 464 million.
In 2018, the total trade volume reached over $ 474 million. Cambodia exported to Malaysia over USD 130 million and imported over USD 344 million. In the first six months of 2019, the trade volume was USD 400 million, of which Cambodia’s export to Malaysia was worth of USD 60 million.
Dr. Mahathir Mohamad and spouse landed Cambodia on Monday 9:40 a.m for an official visit to the Kingdom of Cambodia from 2-4 September 2019, at the invitation of Prime Minister Hun Sen of the Kingdom of Cambodia.