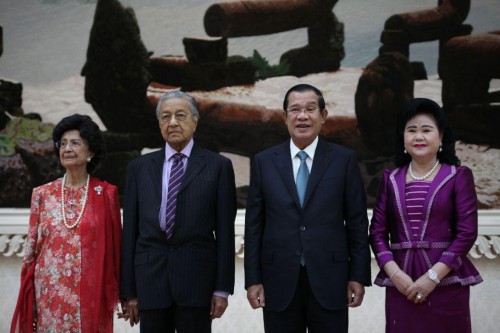 Cambodian Prime Minister Hun Sen and Malaysian Prime Minister Dr. Mahathir Mohamad agreed that the superpowers’ sanctions against small states are injustice, speaking in a bilateral meeting on Tuesday at the Peace Palace.
Dr. Mahathir stated: “it is unfair that small states could not impose sanction on big states, yet suffer sanctions by the superpowers.”
He continued that the sanction does not only impact the victimized country, but also their trade partners.
Both prime ministers also exchanged views on regional and global issues of common interest and concern, including cooperation amongst ASEAN Member States; issues of South China Sea; developments in Rakhine State; counter terrorism and other current global issues.
“On regional economic cooperation, the two leaders shared the views that the Regional Comprehensive Economic Partnership (RCEP) will contribute to regional economic integration and growth as well as in safeguarding multilateral trading system and expressed the need to conclude this Agreement within this year,” according to a joint statement dated Tuesday.
It is worth noting that Dr. Mahathir Mohamad and spouse landed Cambodia on Tuesday 9:40 a.m for an official visit to the Kingdom of Cambodia from 2-4 September 2019, at the invitation of Prime Minister Hun Sen of the Kingdom of Cambodia.