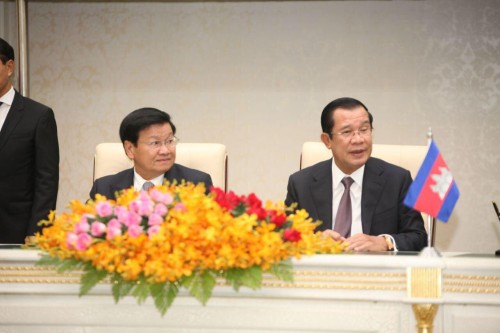 Cambodia-Laos has completed 86 percent of border demarcation, according to the joint communique released on Thursday.
“Both sides agreed to task the Joint Boundary Commission (JBC) of the two countries to jointly draft, as soon as possible, a Treaty on the Demarcation of the Boundary between the Kingdom of Cambodia and the Lao People’s Democratic Republic pertaining to the segments where both sides have completed the border demarcation amounting to 86% of the borderline between the two countries,” the joint communique stated.
“For the remaining un-demarcated border segments, both sides agreed to continue to discuss ways to resolve peacefully the issues as soon as possible. Both sides also agreed to task the JBC of the two countries to discuss implanting complementary boundary pillars in the above-said 86% border segments and to produce a border map showing the boundary line accepted by the two sides for attachment to the above-said Treaty,” it added.
Prime Minister of Lao People’s Democratic Republic (Lao PDR) Dr. Thongloun Sisoulith and a high-level delegation arrived in Cambodia at 9:30 a.m on Thursday for a two-day official visit from 12-13 September 2019, at the invitation of Cambodian Prime Minister Hun Sen.