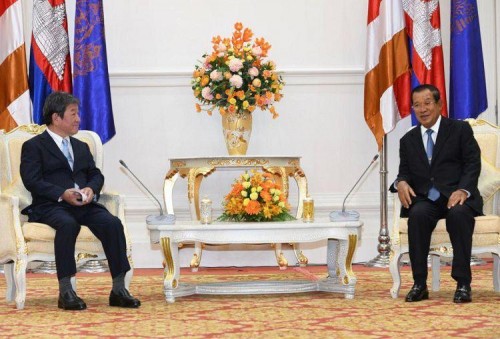 Cambodia and Japan have agreed to resume mutual travel and other activities, disrupted by COVID-19 pandemic, to further boost their economic, trade and investment ties.
The agreement was made during the courtesy meeting here this morning at the Peace Palace between Samdech Akka Moha Sena Padei Techo Hun Sen, Prime Minister of the Kingdom of Cambodia and visiting Japanese Foreign Minister H.E. Motegi Toshimitsu, H.E. Eang Sophalleth, Assistant to the Cambodian Premier told reporters after the meeting.
Samdech Techo Hun Sen suggested the resumption of ANA flights which will normalise the travels between the two countries, but with preventive measures, adding that the flight resumption will increase the volume of both countries’ trade and investment.
The Cambodian Premier took the opportunity to thank the Japanese government and people for their support for Cambodia as well as for Cambodian students and workers studying and working in Japan, especially for their assistance to Cambodia to contain and prevent the spread of COVID-19.
Samdech Techo Hun Sen also spoke highly of Japan-funded projects in Cambodia which are neither stopped nor postponed, but is running normally.
For his part, H.E. Motegi Toshimitsu lauded Cambodia’s successful efforts in preventing the deadly disease and the country’s rapid development compared to his visit in 2014.
He informed Samdech Techo Hun Sen that Japan has completed the feasibility study on the Sihanoukville Autonomous Port extension project and sought the Cambodian Prime Minister’s support to the project.
According to Samdech Techo Hun Sen, Cambodia-Japan bilateral trade reached some US$2 billion last year, of which US$1.2 billion were Cambodian exports to Japan. Up to the 3rd quarter of this year, Cambodia exported about US$500 million worth of goods to Japan and imported US$300 million from the country.