Cambodia-Hungary Agree to Re-Open Embassy in 2021 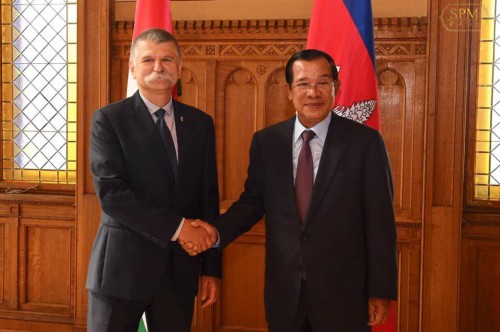 Cambodian Prime Minister Hun Sen and Hungary’s Prime Minister Viktor Orbán agreed to re-open the embassy in 2021, marking the 65th anniversary of Cambodia-Hungary diplomatic relations.
The agreement was reached at the bilateral meeting between the two premiers on 13 June 2019 in Hungary’s capital Budapest.
Cambodia and Hungary established diplomatic ties on 20 September 1956 but was interrupted Phnom Penh fell into Khmer Rouge regime in 1975.
Prime Minister Hun Sen said that although the two countries had previously closed embassies in their respective countries, the premier wants to reopen the embassy in order to strengthen the relations and expand comprehensive cooperation on all sectors in both bilateral and multilateral frameworks. Prime Minister also underlined greater cooperation in economic, trade and tourism for both countries.
Delegate minister Kao Kim Hourn reported that Prime Minister Viktor Orbán praised Cambodia’s socio-economic development and that Hungarian companies are interested in investing in Cambodia.
According to Hungarian Minister of Foreign Affairs and Trade, Péter Szijjártó, Hungary’s Eximbank is opening a 64-million-dollar credit line to facilitate business cooperation, and 38 companies will be attending the upcoming Hungarian-Cambodian business forum.
“Our politicians are working to create opportunities for tightening business relations,” he said according to Hungary’s foreign affairs press.
“In addition, Cambodia is also being assisted with Hungarian water management experience and professional expertise to ensure that more people have access to clean drinking water and wastewater disposal services”, Mr. Szijjártó told reporters. “Hungary is also calling for Cambodia to receive more international support towards the eradication of landmines”, he added
Cambodian Prime Minister Hun Sen thanked Hungary for the support it has pledged, and particularly for the assistance it has offered within the field of water management. Premier Hun Sen in return pledged to attend Budapest Water Summit in 2019. He also invited Viktor Orbán to attend the Asia-Europe Meeting (ASEM) in 2020 hosted by Cambodia, and that Viktor accepted the invitation.
In the bilateral relations, Hungary has provided HUF 100 million (USD 350,000) to the State of Cambodia for the construction of Kompong Kantout orphanage of Cambodia, France, and Hungary in Kandal province in the late 1980s, and in 1997, the Hungarian Red Cross provided medical aid, worth of USD 10,000 to flood victims in Cambodia.
Regarding human resource development, from 1980-1991, Hungary has trained a total of 195 Cambodian students. From 2014 to 2018, at least 50 Cambodian students received scholarships under the Sripendium Hungarian Program to study bachelor’s and master’s degrees in fields such as agriculture, humanities, engineering, economics, natural sciences, and more. This year, 29 Cambodian students are studying in Hungary.
During this 2019 official visit of Prime Minister Hun Sen, Cambodia-Hungary signed three agreements, including:
(1) Agreement between the Royal Government of Cambodia and the Government of Hungary on Economic Cooperation;
(2) Education Exchange Program between the Cambodian Ministry of Education, Youth and Sport and the Ministry of Human Resources of Hungary for 2020-2022; and
(3) a Memorandum of Understanding on Human Resource Development Cooperation between Cambodian National Institute of Tourism and the University of Milton Friedman University in Hungary.