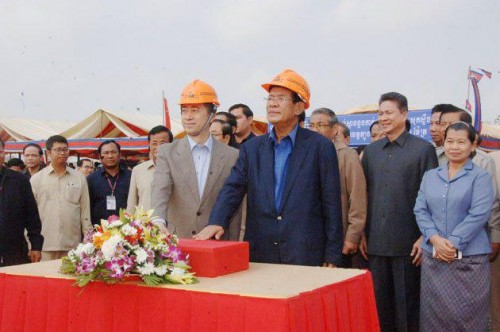 Samdech Akka Moha Sena Padei Techo Hun Sen, Prime Minister of the Kingdom of Cambodia, reiterated this morning the strong relationship between Cambodia and China initiated more than 60 years ago by His Majesty the late King of Cambodia, Samdech Preah Norodom Sihanouk.
Addressing to the groundbreaking ceremony for the construction of another bridge over the Mekong River in Kampong Cham province, Samdech Techo Hun Sen recalled the history of Cambodia-China diplomatic relations established by Samdech Preah Norodom Sihanouk, and the first Chinese Premier H.E. Zhou Enlai.
In response to the question of some people over the reason why Cambodia has close ties with China, the Cambodian premier explained that China always adheres to the policy of equality and mutual respect – a special polity in the world.
Samdech Techo Hun Sen also expressed his gratitude to the Chinese government and people for their support to the infrastructure development in Cambodia.
According to a report of the Ministry of Public Works and Transport, China has funded the construction of a total of 2,700 kilometres of road in Cambodia.
Of the figure, nearly 2,000 kilometres of road have been constructed and rehabilitated, and some 700 kilometres others are under construction using in total US$2 billion concession loan from China, it pointed out.
H.E. Sun Chanthol, Senior Minister and Minister of Public Works and Transport, said more infrastructure construction will start this year, among them some will be built under China’s financial support.
With the new bridge, Stung Trang-Krauch Chmar Bridge, whose construction began this morning under the presidency of Prime Minister Samdech Techo Hun Sen, there are now eight major bridges in Cambodia built under China’s financial assistance. The other seven are Koh Thom Cambodia-China Friendship Bridge, Chroy Changvar Cambodia-China Friendship Bridge, Sekong Cambodia-China Friendship Bridge, Prek Kdam Cambodia-China Bridge, Stung Treng Cambodia-China Bridge, Takmao Cambodia-China Bridge, and Prek Tamak Cambodia-China Bridge.