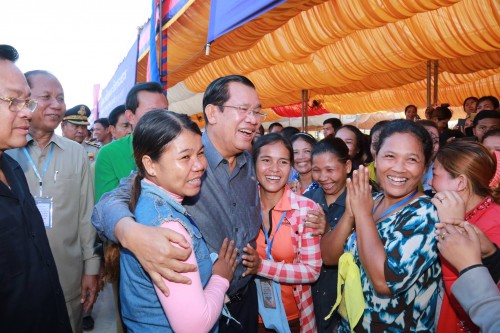 Prime Minister Samdech Akka Moha Sena Padei Techo Hun Sen confirmed this morning Cambodia’s non-interference stance over the Rohingya crisis, saying that it is the internal affair of Myanmar.
Addressing to a get-together with more than 18,000 factory workers and employees at 7NG industrial zone in Ksach Kandal district, Kandal province, Samdech Techo Hun Sen underlined that Cambodia will not interfere in Myanmar’s internal affairs.
The Cambodian premier also expressed his sadness over the crisis in Myanmar’s Rakhine State, in the Philippines, and other parts of the world.
Today, there is an election on a resolution related to the Rohingya issue, said Samdech Techo Hun Sen, stressing that the principle of non-interference is the major principle for Cambodia, therefore the Kingdom will vote against any resolution affecting Myanmar’s integrity.
Cambodia is considering providing humanitarian assistance to Rakhine’s people, some of them are living in Myanmar while others fled to Bangladesh, he added.
Since August last year, more than 600,000 Rohingya have escaped violence in Myanmar’s Rakhine State. The UN and other nations are now putting pressure on Myanmar on this issue.