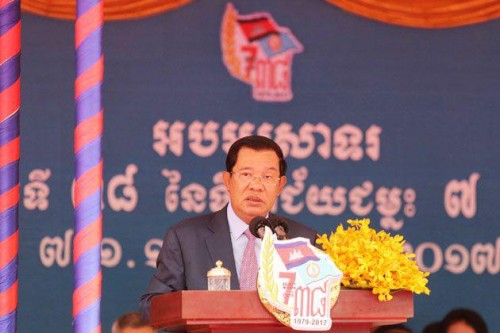 Thousands of Cambodian people, including senior officials, civil servants, armed personnel, students and monks, gathered here this morning at the headquarters of the ruling Cambodian’s People Party (CPP) to commemorate the 38th Anniversary of January 7 Victory Day.
Samdech Akka Moha Ponhea Chakrei Heng Samrin, President of the National Assembly and CPP Honorary President and Samdech Akka Moha Sena Padei Techo Hun Sen, Prime Minister and CPP President, presided over the annual celebration.
“January 7, 1979 was the historic victory of the Cambodian people in overthrowing the regime of Pol Pot’s genocide, ending the darkest period of Cambodia, and ushering in a new era of independence, freedom, democracy, and social progress. Today is a great event that the people of Cambodia in the whole country are happy celebrating the 38th anniversary of the glorious victory with great pride on numerous major historic achievements scored over the past 38 years, including those obtained in the recently passed 2016,” said Samdech Techo Hun Sen on the occasion.
The premier recalled the Cambodian history, from the coup in March 1970 that led to the Khmer Rouge regime killing their own people and devastating everything of national spiritual and material values, to the national liberation on January 7, 1979.
“The January 7 victory saved lives of the remaining people in a timely manner and gained back for the people their rights and freedom. That had revived every Cambodian spiritual and material values accumulated for thousands of years, while making active contribution for peace and security in the region. This is the historic truth that no force could twist, exaggerate, forget, and/or destroy,” he underlined.
Thirty-eight (38) years have passed, but the January 7 spirit still exists in the hearts of Cambodian people, not only those who survived the Khmer Rouge genocidal regime, but also the younger generation.
Dr. Sorn Samnang, Government Advisor and President of the Cambodian Historians Association, told AKP’s reporter that it was a historical day when Cambodian people left that dark regime (Khmer Rouge April 17, 1975-January 7, 1979).
“January 7, 1979 opened a new historical page for Cambodia, from the deadly gorge to the current development in almost all sectors,” he stressed.
Mr. Long Meng Heang, who graduated in English Literature from InterED Institute said he was not born in that period, but he feels familiar with the January 7 Victory Day as he always hears people talk about it.
For her part, Miss Hor Dolla, a student of the Royal University of Law and Economics said even though people have different ideas of the January 7 Day, to her it was the day giving back freedom to all the Cambodian people and making the Kingdom change to a new face with international recognition.
“I was born after 1979, but thanks to historical books and the older generation, I know that January 7 was the day when the National United Front for Salvation of Kampuchea overthrew the [Pol Pot] genocidal regime under both spiritual and material support from the Vietnamese soldiers,” said Ms. Ros Sina, a medical practitioner.
Miss Kun Sothida, a midwifery student, said as far as she knew, January 7 was the day when her parents and relatives survived the Khmer Rouge genocidal regime.
The January 7 is a public holiday for all civil servants, students, employees and workers. On the occasion, movies, songs and shows in commemoration of the annual event are displayed on radio, TV and so on.