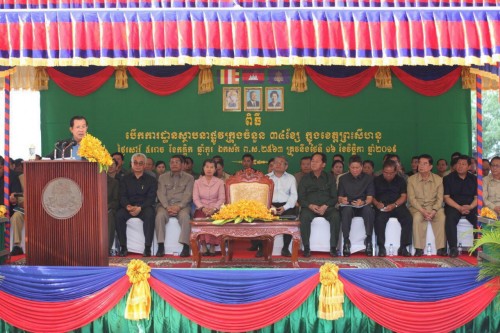 The Royal Government of Cambodia and the Chinese Government planned to hold the first official consultation on feasibility study of the bilateral free trade agreement (FTA) between the two countries on 4 December 2019, speaking at the inauguration of road construction in the kingdom’s coastal province Sihanoukville on 16 November 2019.
“FTA will further boost Khmer-Sino trade; every country trades with China, even the US,” the premier stated.
“The US has China Towns everywhere; same in France… But when Chinese comes to invest in the kingdom, many criticisms arise,” he added.
Spokesperson of the Ministry of Commerce Seang Thay told Fresh News that today China only imports four agricultural products from Cambodia, including corn, cassava, rice, and banana; while the kingdom plans to export mango, pepper, dragon fruit, Pailin longan, and coconut.
Cambodia-China trade volume reached USD 7.4 billion in 2018, in which the kingdom exported 1.3 billion worth of goods. The two countries aimed to reach bilateral trade worth of USD 10 billion by 2023.