Cambodia-China Free Trade Agreement to Be Signed Next Month 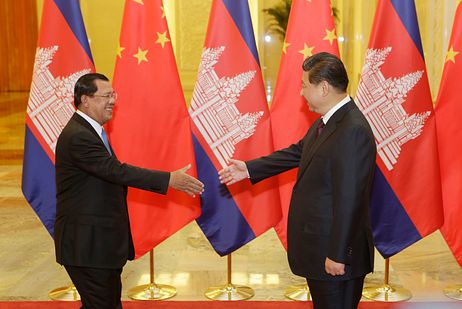 Source: AKP
The Kingdom of Cambodia and the People’s Republic of China will sign their bilateral Free Trade Agreement (FTA) before Aug. 12, 2020.
At a discussion on implementation framework of Action Plan 2019-2023 on Building Cambodia-China Community of Shared Future held here yesterday, Cambodian Deputy Prime Minister H.E. Hor Namhong said Samdech Akka Moha Sena Padei Techo Hun Sen, Prime Minister of the Kingdom of Cambodia will go to China for the FTA signing.
The signing of FTA has two meanings, both economically and politically, underlined the DPM, explaining that in economic terms, this agreement will help the Cambodian economy to develop further and in political terms, it is a message to the EU that Cambodia has another special economic gateway beside the EU.
Recently, Cambodian Secretary of State for Economy and Finance H.E. Vongsey Vissoth told the media that Prime Minister Samdech Techo Hun Sen will leave for Beijing, China before Aug. 12 to preside over the signing ceremony of FTA, and to engage in discussions to boost the economy.
Early this week, both sides announced the conclusion of the FTA negotiations after six months of discussions. The successful conclusion of a free trade agreement in a short period of time shows the strong commitment of both countries’ leaders to strengthen closer and broader relations. This FTA will bring about many economic and social benefits to the people of the two countries through the liberalisation of trade in goods and services, the promotion of comprehensive investment, as well as cooperation in a number of areas.