Cambodia Approves 153 Projects worth about $5.2B in the First Semester: PM Hun Sen 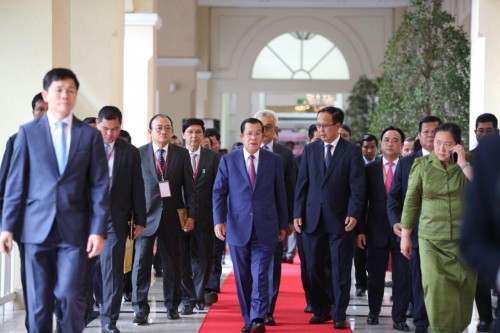 In the first six months of 2019, Council for the Development of Cambodia has approved 153 projects worth about $5.2 billion, Prime Minister Hun Sen addressed at the Sri Lanka-Cambodia Business Forum, held Wednesday at the Sofitel Phnom Penh.
As far as investment is concerned, Cambodia remains a target country with potential for both local and foreign investors.
According to the Council for the Development of Cambodia (CDC), Cambodia’s investment outlook has improved over the past five years (2014-2018) with 959 investment projects approved, totaling about $23 billion in investment capital, and creating one million jobs.
“In the first six months of 2019, CDC approved 153 projects worth about $5.2 billion. Compared with the first half of last year, the number of projects increased by 48 and investment grew by about $2 billion,” the premier stated.
It is worth noting that, over the past two decades, Cambodia has achieved average annual economic growth of around 7.7 percent and graduated from low-income status to become a lower middle-income country in 2015. Moreover, Cambodia’s economy expanded at 7.5 percent in 2018, providing the foundation for continued robust growth in 2019. This shows that Cambodia is on the path to achieving upper middle-income country by 2030 as set out in the national policy agenda.