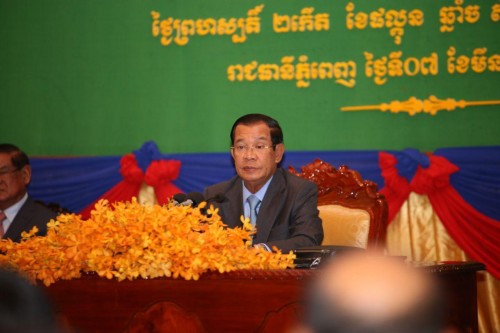 Cambodian Prime Minister Hun Sen reminded all government officials to be highly responsible for their duties and warned that it takes only 15 minutes to dismiss any official.

Prime Minister said that every officer must carry out his duties and always take two motives and five approaches.

“We have two motives – internal interferences and make friends based on our independence and sovereignty – combined with five approaches for better governance – self-reflection, showering, exfoliation, treatment and surgery,” Cambodian Strongman underlined.

“To dismiss official, it takes me only 15 minutes to stamp and send it immediately to Fresh News for the quick broadcast,” he added.

“I have to take out gravel and sand from my shoes so that I can walk further.”

“This is hurtful fifth approach, surgery, in removing Commander from RCAF [which the kingdom has never done before],” he said on his official Facebook page shortly following the royal decree.